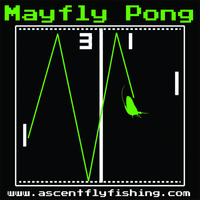 Ask any fly fisherman and they will tell you that the season to fish dry flies is never long enough. As the bugs start to fly over the water and the trout rise to meet them, the fly angler needs to be able to quickly identify the family of invertebrate and choose the best fly pattern to match the hatch before it passes them by. Here are three tips that will enable you to - at a glance and from a distance - identify which bugs are on the water and the best dry fly pattern to tie on in order to catch more fish.

Identifying Invertebrate Flight Patterns
The flight of the "Big Three" aquatic invertebrate families (Mayflies, Caddis Flies, & Stoneflies) is as defined and unique as a set of fingerprints. While each of these invertebrate families might be made up of hundreds or even thousands of individual species, these flight patterns will hold true to all within a given family, allowing the vigilant angler to quickly narrow down the dry fly to tie on from hundreds of patterns to just a score. 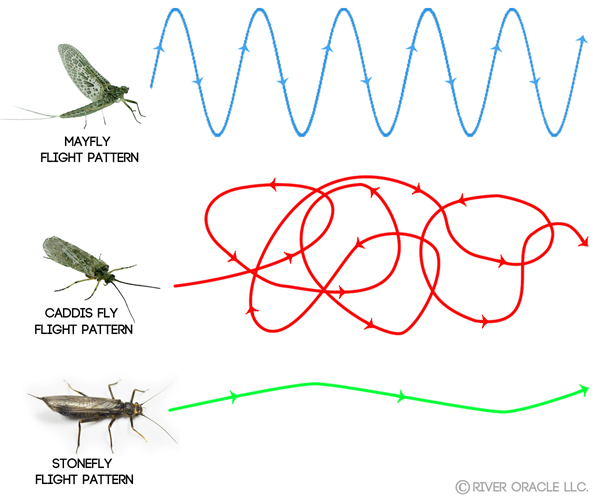 The flight of the mayflies is reminiscent of the game of Pong, with the adults moving back and forth across the water in a wave-like pattern. While there might be a little horizontal drift from side to side, the dominant movement of the mayfly in motion is an even, steep to gently rolling, up and down flight that is unique to this family.

The flight of the caddis fly is much more sporadic and unpredictable than that of the mayfly. A swarm of caddis flies over the water can be best compared to dumping a bucket of bouncy balls into a clothes dryer; it is chaotic! Caddis flies spiral and bounce, cork screwing and fluttering, moving just slightly more in a forward direction than they do side to side, backwards, up, and down.

Stoneflies have the most decisive flight patterns of the Big Three, and move about like a Chinook helicopter on a mission. Making just slight corrections to their flight, these heavy-bodied, long-winged invertebrates pick up momentum as they labor through the air in a largely straight forward flight.

2. The Behavior of the Egg-Layer
Just as each of the major aquatic invertebrate families have a distinctive flight pattern, they are also equally recognizable to the attentive angler by how they return to the water and lay their eggs.

Mayflies are the models of the "drag-free-drift" that the dry fly anglers are always seeking to imitate. The egg-laying mayfly alights gently on the water, wings held erect like little sails, and their behavior is neither flashy or extravagant as they simply go with the flow. After dipping their abdomens beneath the surface of the water to deposit their eggs, the mayfly quietly expires on the water.

Like a miniature, aquatic version of the film Footloose, Caddis flies are the Kevin Bacons of the invertebrate world! While the egg-laying caddis fly returns to the water in a number of ways, the overwhelming number of caddis species dive and bounce across the surface of the water in the same sporadic and spiraling flight that defined them in the air.

The largest of the "Big Three" aquatic invertebrate families, the Stoneflies make their presence known when they return to the water to lay their eggs. Hitting the water like a wounded helicopter, the legs of the egg-laying stonefly churn the water, allowing them to quickly skitter over the top of the water. Shaming an Ivy League crew team with the fervor of their strokes, the adult stoneflies almost run across the surface of the water in an egg-laying behavior unique to themselves.

3. Learn From The Masters
No matter how acrobatic my pursuit, or how vigorously I wave my bug seine in an attempt to capture a flying insect, there are masters of the river who surpass all of my bug collecting aspirations. Tirelessly sampling both night and day, these masters of entomology patiently chronicle and update a running log of the hatch, laying in lines and displaying their most recent captures. The Jedi-like masters that I elude to are not some PhD level bug geeks, but the countless species of spiders that inhabit stream banks and willow thickets along every trout water in the world. Held in the threads of their webs is an up-to-date catalog of family, species, and invertebrate life cycle hatching, hopping, and flying around that section of water. These time-lapse photos of the hatch found in stream side spider webs give the angler an unparalleled opportunity to crack open their fly box and accurately match the hatch. 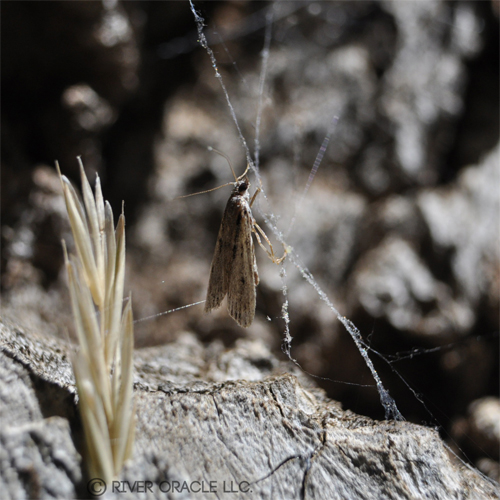