Fish a Purple Fly in Memory of Prince! 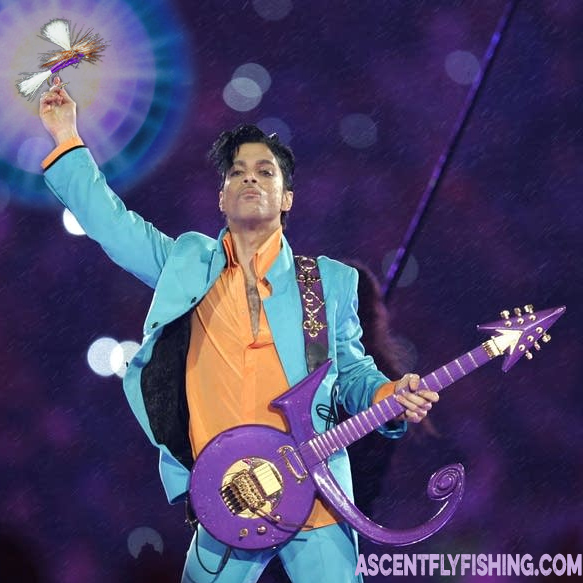 It takes a confident man to rock as much purple as the artist Prince did before his passing on April 21, 2016. The man exuded an animal magnetism that drove women crazy the same way that trout lose their fishy minds when a purple fly drifts their way!

The foundation to matching the hatch is the unalienable fact that trout need to see the fly in order to eat it.

There are a number of barriers in the world of trout that stand between the angler and catching fish ,with the most common being off-colored water and an abundance of natural food in the river. As we discussed a couple of weeks ago in our article on tactics for fishing during runoff, fishing dark flies in high, muddy flows help to maintain a crisp profile that can pierce the fog of silt and sand to be seen and eaten by hungry trout. A dark purple fly is an excellent option when fished during runoff, but where purple really shines is during low flows, in clear water, and when competing for the trout's attention against thousand of natural insects in the water.

Purple is Visible in Clear Water Up to 65 Feet

As an attractor, no flies outshine purple bugs in the world of trout! In gin-clear water, purple light can penetrate further and deeper than any other color spectrum, reflecting from the metallic surface of a PURPLE DISCO BAETIS or PURPLE SQUIRMY WORM to catch the eye of the feeding trout. While red flies fade to black at 12 feet and green at 25 feet, purple remains flashy and attractive to trout up to 65 feet!

Attractors Stand Out From the Herd

In the cold water lakes and rivers that trout call home, they are at the top of the food chain - the alpha predators, the top dogs. When trying to illustrate this point to clients, I often invoke an image of the lions of the African plain. Like the lion, trout are on the prowl for easy picking, wanting to pack in as much protein as they can while expending as little energy as possible. To do this, both the lion and the trout will focus on the prey that strays from and looks different from the herd. The bright colors and iridescent shine of the attractor make it stand out from the thousands of naturals drifting through the water and incite that primal nature of the predator! They just can't help themselves and have to take a bite!